Due to COVID-19, Urban Forestry has cancelled the 2021 prescribed burn in High Park and South Humber Park.

The Role of Fire

Since 2000 City of Toronto Urban Forestry has been using fire as a management tool to help restore and expand High Park native plant communities including the globally rare Black Oak savannah habitat. Currently, 28 ha of oak savannah are burned on a rotating cycle. (See Summary of Burn Cycle by Management Unit.)

Prior to European settlement, fire played a pivotal role in maintaining the prairies, savannahs and oak forests that once extended across southern Ontario. This included deliberate burns set by Indigenous peoples as well as naturally occurring wildfires. (See Indigenous History of Today's High Park.)

Fire is an important factor in a healthy oak savannah as it helps to encourage and invigorate native species that have evolved to persist in fire controlled systems. Indigenous peoples used fire to maintain lush grasslands that attracted deer and other game for hunting.

Prairie plants including black oaks respond to modified site conditions following the burn, and grow more vigorously than they would have in the absence of the fire. Fire also works in reducing competition from some invading exotic species that are not adapted to a fire controlled ecosystem.

The natural fire cycle had been suppressed in High Park for over 100 years, and although regular fires have only been occurring since 2000, large improvements are already being observed in the distribution and health of native plant species in the park.

The initial goals for the prescribed burn program established in the management plan focused on enhancing the growth of native species while controlling exotic plant species. Special attention was also focused on targeting small rare plant communities existing in High Park in the hope of encouraging their natural expansion. Annual monitoring for the past several years has shown that many areas in High Park are exhibiting large increases in native plant community patches, as well as a significant decline in some of the exotic species controlled by burning, such as garlic mustard.

High Park is home to many rare and important species that are thriving from prescribed burning. Species in the drier savannah areas are showing large success in expansion such as dryland blueberry, Indian grass, big bluestem, woodland sunflower, sky-blue aster, and a variety of goldenrods and sedges. Wild lupine populations have exhibited an immediate response, with increases in patch size as well as seed production.

In the beginning stages of the prescribed burn program, frequent burns were necessary to reverse the effects of the approximately 100 years of suppressed fire cycles. More frequent burning was required to set-back exotic invasive plants such as buckthorn and honeysuckle, allowing more light to penetrate into the savannah habitats.

Restoration of natural areas is an adaptive process. As the successes of the High Park prescribed burn program continue, the frequency and interval between burns are reevaluated and adjusted accordingly.

Prescribed burn management, in combination with native species planting and invasive species removal, will continue to be a valuable tool used in these rare habitats to ensure their longevity and proliferation. 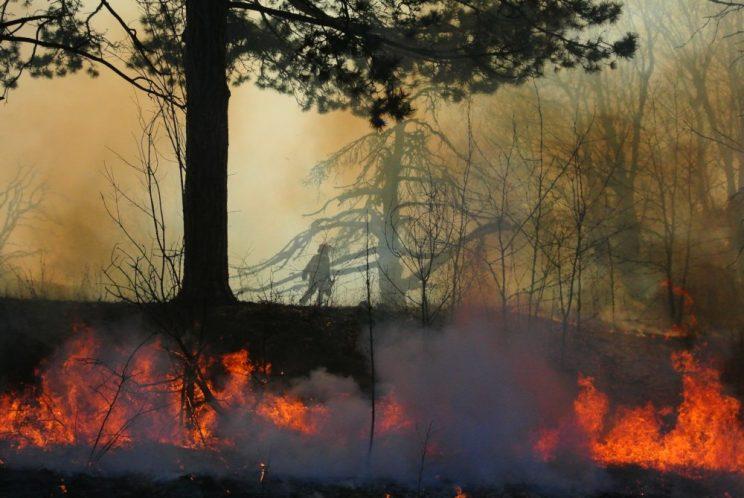 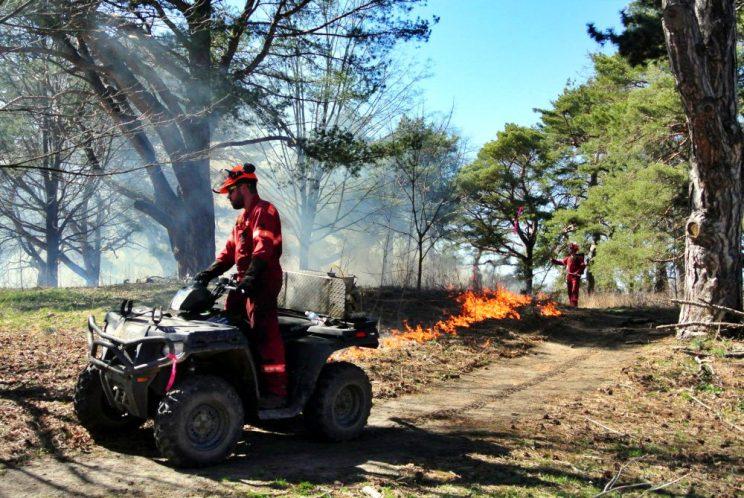 It surprises many people to learn that fire is the best gardener possible for the black oak savannah. The indigenous people who first lived here knew this. They were great observers and students of nature and they noticed that after wildfires swept across the land, the plants grew better and attracted more wildlife. The native people learned that by intentionally and strategically setting fires in the springtime every few years, the vegetation and wildlife would flourish. For thousands of years, our black oak savannah depended on fire for health and survival.

It surprises many people to learn that fire is the best gardener possible for the black oak savannah.

The Price of Progress

When European settlers arrived, they built more permanent homes and communities. They designated land for farming, for logging, for business, for development and recreation. This was no longer a place to set or let wildfires burn across the landscape. The land, the people and their structures were protected by stopping all fires that could be stopped.

For more than a hundred years, we prevented the beneficial age-old relationship between fire and savannah. During this time, the landscape suffered the loss of key species and healthy plant communities. New oak trees became scarce, less robust and less resilient.

Then a small accidental fire in a corner of High Park revealed what we had almost lost. Long-absent savannah grasses and wildflowers grew out of the blackened earth. Plants that had disappeared or had become scarce in the park showed us that their seeds were still in the soil just waiting for fire to return them to life!

How does it Work?

In the early spring, the first grasses and plants to sprout in the black oak savannah are not native to the ecosystem. They actually grow so quickly and thickly that they crowd out the later-sprouting native savannah plants. These early-sprouting plants from distant places have short roots and are not adapted to the savannah or fire. A carefully monitored, quick moving low fire burns away this barrier along with excess leaf litter.

Meanwhile, the extremely long roots of the native savannah plants are not affected by the fire. When the black ash absorbs sunlight, it warms the soil and stimulates the growth of the native plants beneath. Up they come through the enriched soil into the light, ready to attract and support High Park’s wildlife.

2019 - Following careful review of the proposed burn sites in High Park, it was determined that there will not be a burn for spring 2019. This delay will allow time for existing native plants to establish, oak regeneration and additional areas to be ready for burning.

2018 - A prescribed burn in three areas covering a total of 6.6 ha was conducted on April 23, 2018. This was the latest date ever, with old snow still piled at the edge of the burn site.

For a complete history of the prescribed burns in High Park, please see the Summary of Burn Cycle and Media Coverage listings below.

Media coverage of past burns:

SEE NEW LINK BELOW! Learn about the Toronto & Region Conservation Authority’s methodology, findings and observations as presented in the final High Park Terrestrial Biological Inventory Report, 2019. There will be an opportunity to ask questions about the report. Urban…
END_OF_DOCUMENT_TOKEN_TO_BE_REPLACED

High Park’s cherry trees will not be accessible for viewing in person this year due to COVID-19.  Learn more about virtual blossom viewing. The ritual of Sakura (cherry blossom) Hanami (flower viewing) comes to us from Japan where it has…
END_OF_DOCUMENT_TOKEN_TO_BE_REPLACED

As Spring approaches, we look forward to a new year of gardening, stewardship, bird watching and protecting the natural habitats we care about. Some things can be accomplished by groups of people and others can be done at home. For…
END_OF_DOCUMENT_TOKEN_TO_BE_REPLACED

Now that spring-like weather is here, we gardeners are desperate to “get in the garden” but the insects need us to hold on just a little bit longer. Garden waste pickup begins next week (March 15) but we urge you…
END_OF_DOCUMENT_TOKEN_TO_BE_REPLACED

In response to the COVID-19 pandemic, Urban Forestry will not undertake a prescribed burn in High Park and South Humber Park in 2021. Instead, efforts will be focused on working to complete long term planning, and evaluating progress in habitats…
END_OF_DOCUMENT_TOKEN_TO_BE_REPLACED
Share on TwitterShare on FacebookShare on PinterestShare on EmailShare on Reddit
Skip back to main navigation