Grenadier Pond and Other Ponds in High ParkHabitat

A kilometre long and half a kilometre wide, Grenadier Pond offers one of the loveliest vistas in High Park. Although much affected by development onsite and in the surrounding neighbourhood, this large natural pond still provides habitat to a wide assortment of water birds, fish, turtles and other wildlife.

Grenadier Pond is one of the areas within High Park that has been designated as an Area of Natural and Scientific Interest (ANSI) by the Ontario Ministry of Natural Resources based on a report by Steve Varga in 1989. According to this report:

Grenadier Pond is the largest of several ponds in High Park. Development in the surrounding drainage area has reduced its size from 19 ha in historical times to its present size of 14.2 ha. It is primarily fed by storm sewers and runoff from land to the west and east of the pond. To the south, the pond is separated from Lake Ontario by roadways, a railway and Sunnyside Beach.

Water from a pond to the west of Ellis Avenue (West Pond) also flows into Grenadier Pond approximately 30 m to the north of the southwest corner of the pond.

A historic plan of the area from 1864 shows Grenadier Pond separated from Lake Ontario by only a sandbar and the ‘Lake Road’.  The southern edge of the pond was marshland that extended east to connect with today’s Lower Duck Pond. During periods of high water (e.g., spring snow melt), Lake Ontario likely flooded over the sandbar, resulting in occasional flushing of the ponds and elevated water levels (Gartner Lee Ltd. 1995).

Mapping sources indicate that the surface catchment area for Grenadier Pond was much larger historically (47.7 ha) than it is today (24.5 ha), and extended as far north as St. Clair Avenue. When the lands surrounding Grenadier Pond were developed, the drainage system was extensively channelized into storm sewers, and much of the runoff from hard surfaces was diverted out of the catchment. These changes have resulted in a substantial drop in the annual volume of water directed to the pond from groundwater contributions.

The connection between Grenadier Pond and Lake Ontario was cut off in 1853 when the sandbar was widened with fill to accommodate the Grand Trunk Railway, and later widened further by road construction.

In the early 1900s, as the city grew around High Park and the demand for recreation on the pond increased, the marshlands shrank. Structurally, the pond has been “renovated” in successive waves of development, particularly on the eastern and western shorelines (Gartner Lee Ltd. 1995). Wainio et al. (1976) describe the land use changes that have occurred around the perimeter of Grenadier Pond since 1947, after which approximately 4.45 ha were filled to accommodate an expansion of the Queensway roadway, removing a large section of marsh that once rimmed the pond's southern shore. In the 1950s and 60s close to half of the pond's shoreline was dug up and replaced with turf grass stretching to a solid concrete edge to further increase recreational land.

In the 1880s Grenadier Pond was encircled by rich wetlands that provided an important stopover for many species of migrating birds. The shoreline consisted of cattails, sweet flag, grasses and shrubs. The south end of the pond was a sedge wetland that provided spawning ground and habitat for painted turtles, pike, salmon and largemouth bass.

When the marshy shoreline was removed, the pike population dramatically declined, as did the number of migratory birds. Water quality also suffered, largely because of storm-sewer runoff, contaminated with fertilizers and road salt, flowing into the pond from the surrounding neighborhoods. This, combined with prolific droppings of Canada Geese and decaying sediments, overloaded the water with nutrients, causing an imbalance in the pond's ecosystem.

Growing awareness of the importance of preserving natural areas has sparked a number of restoration efforts aimed at rehabilitating Grenadier Pond (see below). 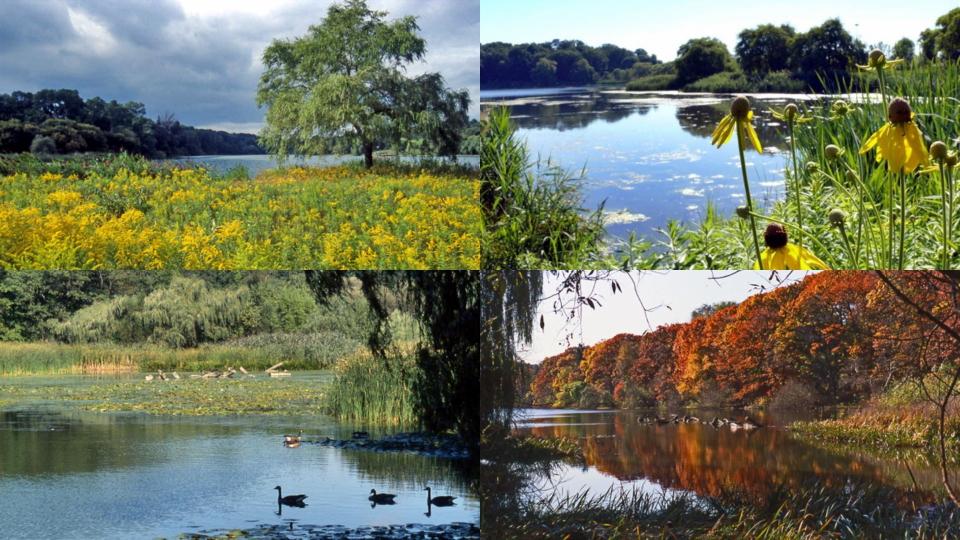 We can help protect the pond's wildlife

Major efforts to rehabilitate Grenadier Pond began in 1994. These included fish stocking (Largemouth Bass and Northern Pike), water quality surveys, and the propagation of native shoreline plants at the High Park nursery. Removal of most of the concrete curbs and restoration of the Grenadier Pond shoreline began in the southeast corner in 1995, and the southwest corner, East Cove and Maple Leaf shoreline in 1996. In 2005 another naturalization project extended the softened edge across the entire south shore of the pond. Shoreline plantings were implemented to enlarge the remnant areas of wetland remaining around the pond and to reduce the impact of waterfowl on the water quality of the pond (nutrient loading).

The Ellis Ave./Grenadier Pond stormwater facilities were constructed in 2006, following an Environmental Assessment study. This included the construction of a wetland at the southwest corner of Grenadier Pond, with a forebay that can be dredged as needed, and installation of oil separation devices on adjacent roads. The target was 75-80% reduction in suspended solids, as well as the heavy metals and bacteria associated with the solids. The changes were expected to result in cleaner water going into Grenadier Pond, more treatment of water flowing out of Grenadier before it reaches the lake, and reduced risk of flooding to adjacent properties. In 2007 additional restoration along the east shore of Grenadier Pond improved fish habitat through a series of underwater shoals, log cribs and root wads.

Although Grenadier Pond is by far the biggest and best known of High Park's ponds, there are several ponds to explore.

The Lower and Upper Duck Ponds are located in the southeast corner of the Park.

There are three less-frequented stormwater ponds in the park: Howard, Ridout and Wendigo Ponds. Howard and Ridout Ponds are at the north end of Spring Creek and can be enjoyed while on the Spring Creek trails. (Spring Creek trail itself surfaces over the historic Laurentian River, seeping through the substrate deep underneath.)

Wendigo Pond can be found on the west ravine nature trails at the north end of Grenadier Pond.

Stormwater ponds are used to trap sediment from rainfall run-off. These ponds also provide habitat for wetland species, including wood duck which have successfully bred at both the Howard/Ridout Ponds and the Duck Ponds. Black-crowned Night-Herons can be seen hunting or resting in nearby trees.

The High Park Natural Environment Committee recently conducted a survey of members and supporters. The results are now available here. It’s heartening to see how much support there is for better protection of High Park’s natural environment, and in particular…
END_OF_DOCUMENT_TOKEN_TO_BE_REPLACED

September 2021 Due to COVID restrictions Urban Forestry is sending out invites to on-site sessions to those who were active in 2019 or have signed up to receive them since them. The general High Park Stewards email list is for…
END_OF_DOCUMENT_TOKEN_TO_BE_REPLACED

The High Park Hawk Watch got off to a “flying” start with several bald eagles on September 1st. It continues daily until November 30. Hawks generally fly when the winds are from the northwest. Keen birders monitor the weather report…
END_OF_DOCUMENT_TOKEN_TO_BE_REPLACED

The City is launching the High Park Movement Strategy: “a study to improve the travel network for High Park and better serve park users and the community.” The first step is an online survey.  More information can be found on…
END_OF_DOCUMENT_TOKEN_TO_BE_REPLACED