The wetlands of Grenadier Pond and the Duck Ponds are important remnants of Toronto’s once-extensive lakeshore marshes. Over a century ago, the entire shoreline was lush with marsh, sheltering many species of waterfowl, fish and amphibians as well as aquatic mammals. Development in and around High Park has taken its toll, but restoration efforts have shown some positive results.

In 2022 the Grenadier Pond Wetland Complex was declared a Provincially Significant Wetland. The complex is noted for its high concentration of significant species (both flora and fauna), its value to wildlife in the intensely developed Toronto area, along with its groundwater seeps and its very high social values (nature appreciation, educational and cultural).

The construction of the rail and road corridor to the south in 1853 cut the land that became High Park off from Lake Ontario and disturbed the natural linkages between its ponds, marshes and creeks and the lake. The large marsh that once rimmed the southern end of the pond was entirely destroyed when it was filled in to build the Queensway roadway in the late 1950s.

Over the years much of High Park’s natural shorelines were altered by filling, hardening and replacement of native vegetation with turf grass. In the 1950s close to half of the natural shoreline edge of Grenadier Pond was replaced by a concrete curb and manicured turf grass. Shoreline vegetation and the gradually sloping “littoral zone”, the most productive part of an aquatic ecosystem, were lost.

The water quality of High Park's ponds declined, largely because of storm-sewer runoff that brought in fertilizers, road salts and other contaminants from the surrounding neighbourhood. The prolific droppings of Canada geese also overloaded the water with nutrients such as phosphorus, causing algae to flourish. 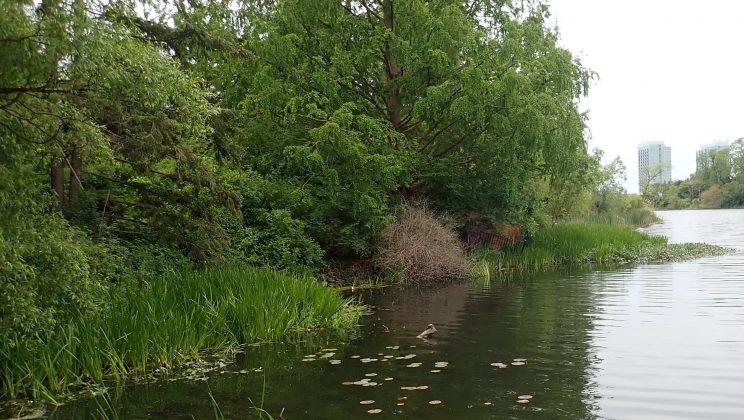 Starting in the 1990s, a number of steps have been taken to improve the health of High Park’s aquatic system. These include:

Naturalization of Grenadier Pond’s hardened shorelines began in 1995, focussing initially on the east and southwest shorelines. Sections of the concrete curbs were removed, and fill was placed to recreate a more natural underwater profile. With the assistance of hundreds of volunteers, the softened shoreline was then planted with a wide variety of bulrushes, sedges and wildflowers. In 2005 another naturalization project extended the softened edge across the entire south shore of the pond.

Many of the naturalized portions of Grenadier Pond’s shoreline are now well established. The naturalization program has enhanced biodiversity along the shoreline, created spawning habitat for pike, bass and other fish, and vegetation cover for juvenile fish.

Unfortunately, large areas of the restored shoreline and marsh have since been invaded by phragmites. Efforts are now underway bring this highly invasive species under control. See Phragmites in High Park

In 1997, the wetland at the northern end of Grenadier Pond was expanded and rehabilitated to improve its functioning, increase the diversity of plant species, and improve wildlife habitat.

In 2000, a different kind of wetland was built in the Lower Duck Pond as a demonstration project. Its major function is to clean stormwater entering from Spring Creek. Separated from the rest of the Lower Duck Pond by a berm, the wetland contains cattails and other aquatic plants that help remove pollutants from water while providing habitat for wildlife.

A number of stormwater management facilities have been constructed and/or enlarged. See Stormwater Ponds in High Park

Grenadier Pond has lost its natural connection to lake Ontario. Today, water from the pond flows through an outflow weir at the southwest corner of Grenadier Pond, to empty into the Humber River and then into Lake Ontario.

To re-establish a more natural water level regime, the outflow weir was modified in 1996 so that the water level can be lowered during the late summer and early fall to stimulate the growth of aquatic plants near the shoreline, and raised in the spring to provide flooded edge habitat for spawning fish. (In practice, this regime has not been implemented consistently over the years.)

A 1995 study of Grenadier Pond discovered that about 40% of the phosphorus entering the pond each year was coming from stormwater and overland runoff contaminated with Canada goose excrement. High levels of phosphorus were stimulating unwanted algal growth that in turn caused low oxygen levels in the pond during the late summer and early fall.

The City is using a number of approaches to reduce the high nutrient loading caused by waterfowl. Shoreline naturalization projects that replace turf grass with shrubs and high grasses tend to discourage Canada geese from grazing. Signs have been developed to persuade people not to feed waterfowl. Under a permit from the Canadian Wildlife Service, the Toronto and Region Conservation Authority staff treat goose eggs in the spring to prevent them from hatching. Occasionally round-ups are conducted to relocate geese. See Canada Geese in High Park

Because of these actions and improvements in stormwater management, nutrient loadings are improving significantly in Grenadier Pond.

Shoreline restoration and stormwater management have benefited fish and other aquatic life. In 2007 additional restoration along the east shore of Grenadier Pond improved fish habitat through a series of underwater shoals, log cribs and root wads.

The High Park Stewards and the prescribed burn that took place on April 29, 2022 are both featured in an article by Emily Waugh in the Toronto Star. Read the article as it first appeared online or the Pressreader version…
END_OF_DOCUMENT_TOKEN_TO_BE_REPLACED

High Park’s cherry trees are blooming! Vehicle access is closed in the park. For more information, including a map of locations, virtual tours and accessibility information visit the City’s Cherry Blossoms webpage. Please take care to respect wildlife and their…
END_OF_DOCUMENT_TOKEN_TO_BE_REPLACED

Urban Forestry will undertake a prescribed burn in 4 locations in High Park on Friday, April 29. Be aware that the park will be closed to vehicles on burn day.  See notice below for details and map. Indigenous people, the…
END_OF_DOCUMENT_TOKEN_TO_BE_REPLACED

We are pleased to announce that the Grenadier Pond Wetland Complex has been given “Provincially Significant Wetland” status by the Ontario government. The evaluation summary, conducted by Toronto Region Conservation for the Ministry of Northern Development, Natural Resources, and Forestry, …
END_OF_DOCUMENT_TOKEN_TO_BE_REPLACED