Invasive plants pose some of the greatest challenges to the preservation and restoration of High Park's natural environment. The ones described below are "herbaceous" species, meaning they don't have woody stems. There are also a number of invasive woody plants (trees, shrubs and vines).

To learn more about how City staff and volunteers are dealing with these species, see Controlling Invasive Plants and High Park Stewards.

Early European settlers had the best of intentions when importing this exotic, now invasive herbaceous plant, traditionally used for its medicinal properties and as a garden vegetable, favored for its garlic taste. In addition, it is relatively easily grown and provides good nutrition, high in vitamins A and C. Garlic mustard grows in a variety of disturbed habitats, preferring woodlands and floodplains but generally speaking will grow in moist, rich soils with some shading.

Its best identification traits are the garlic-scented leaves when crushed and white flowers with alternate heart-shaped leaves on the flowering stalk. Like many herbaceous invasive plants, its rapid growth and prodigious seed crops are able to out-compete native flora by effectively shading out competitors. Garlic mustard is in fact a fungicide, destroying vital fungal (i.e. mycorrhizal) relationships which many native tree and herbaceous species depend on for water and nutrients. As a biennial it grows as a basal rosette the first year and throughout the winter, taking advantage of insulating snow and winter sunlight before flowering in early spring, setting seed soon after and dying off by July.

Since humans created the disturbances permitting garlic mustard to thrive, a suitable control or eradication initiative might include harvesting wild populations for use in the kitchen. A delicious edible pesto can be made from its leaves with multiple recipes and how-to guides available on the internet. As an evergreen, it can also be eaten fresh throughout winter.

It is important to keep in mind not to harvest garlic mustard for human consumption from dumps, ditches or roadways as resident plants can uptake and accumulate harmful pollutants discharged into the natural environment.

PLEASE NOTE; Collecting is not permitted in High Park.

Chances are you’ve seen or wandered through a patch of white sweet clover given its abundance in Ontario. It is an alternative-leaved biennial wildflower growing up to 5’ tall introduced into North America from Europe as high quality forage for cattle, and still used as animal forage and as a cover crop on farms. As a nitrogen fixer, it increases soil fertility by converting atmospheric nitrogen into usable nitrogen in the soil. Its flowers are favored by bees and other pollinators, historically planted as a nectar host plant by beekeepers. In fact, “Melolotus” in Greek means honey.

White colored flowers with small stalks are found in dense clusters in the top few inches of main stems and bloom June through August in the plant's second year of growth. As a successful invader white sweet clover has a strong and deep taproot, permitting survival in dry soils and drought conditions. Also, seeds remain viable for up to 30 years in the seedbank and will readily establish following a disturbance, further complicating eradication efforts. White sweet clover dominates successional areas including meadows, prairies, savannas, woodlands, roadsides and waste places, having the ability to colonize and thrive in a variety of disturbed habitats, even a barren, nutrient-poor quarry floor! 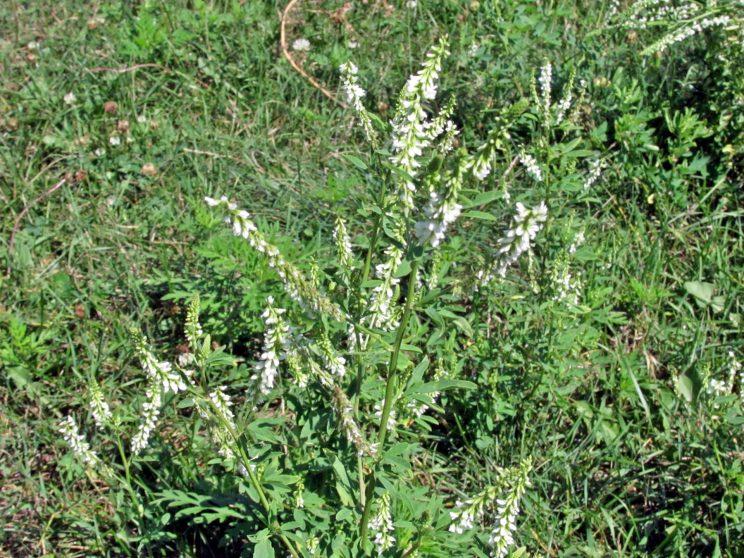 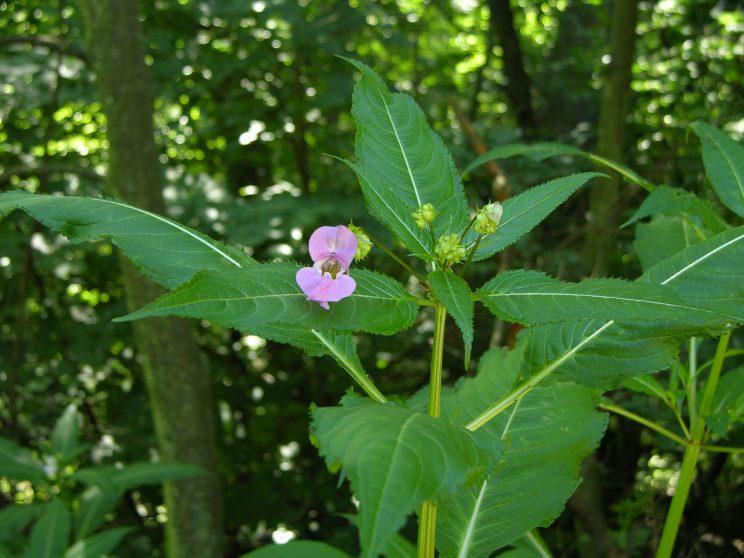 Like most invasive herbaceous species, Himalayan balsam forms dense colonies in disturbed environments, out-competing and choking out native ground vegetation, thereby threatening local biodiversity. It is similar in appearance to our native jewelweed/touch-me-not (Impatiens capensis), both with large showy flowers; Himalayan balsam has pink/purple flowers and jewelweed has orange. Generally speaking, it prefers woodlands and floodplains but will thrive in any disturbed location with moist, rich soils and some shading. Owing to its invasive profile are explosive seedpods, hurling up to 2500 seeds per plant airborne once fully matured. In fact, once mature, merely touching the seedpods demonstrates this phenomenon. Also, it can reach heights in excess of two meters and easily overwhelms and displaces native flora with its rapid growth. Seeds often end up buoyant in local watercourses where survival is relatively long, facilitating colonization in new environments downstream.

Himalayan balsam is particularly damaging to riparian areas where dense groves form monocultures; following die-back in the fall bare soil is exposed resulting in increased soil erosion and sedimentation of watercourses. Control is achieved through manual weeding, cutting stalks before seed dispersal or by herbicide application.

This plant species has been nominated as among 100 of the "World's Worst" invaders (GISD, 2010). Purple loosestrife has been a beautiful and aggressive invader in North America since the 1800’s. Originally from Europe and used as an ornamental flowering plant, the seeds escaped and now have spread across much of Canada and the United States. Purple loosestrife flowers from late June to early September, relying on pollination by insects or birds to flourish, and can grow up to 6.5 feet/2m high. It has distinctive large flower spikes made up of many smaller flowers – 5 to 6 pink-purple petals surrounding a smaller yellow center. Plants can go to seed as early as late-July. The leaves are downy with smooth edges, are usually oppositely arranged in pairs that whorl around the stem.

Mature plants can reproduce vegetatively via woody underground perennial rootstocks that can spread quickly throughout the year. These rootstocks are extensive and can create a dense structure that chokes out other vegetation. As tiny as grains of sand, seeds are easily spread by water, wind, wildlife and humans. Germination can occur the following season and in many environmental conditions. Seeds are hardy and can lay dormant in the seed bank for several years before sprouting.

Several control methods have been used on purple loosestrife with varying levels of success. So far, the most successful method has been a biological control using beetles. In High Park, purple loosestrife in the wetlands was brought under control by the introduction of beetles in 2003-2004; Galerucella pusilla and Galerucella calmariensis, eat the leaves and new shoot growth which seriously affects growth and seed production of the plant (OFAH, 2011). 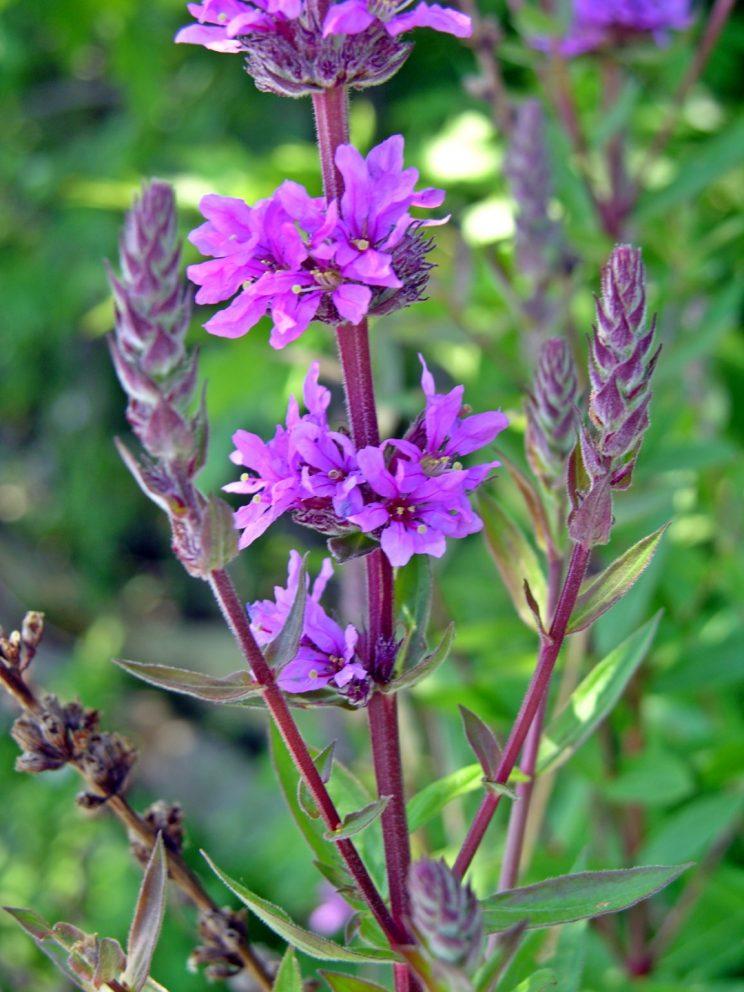 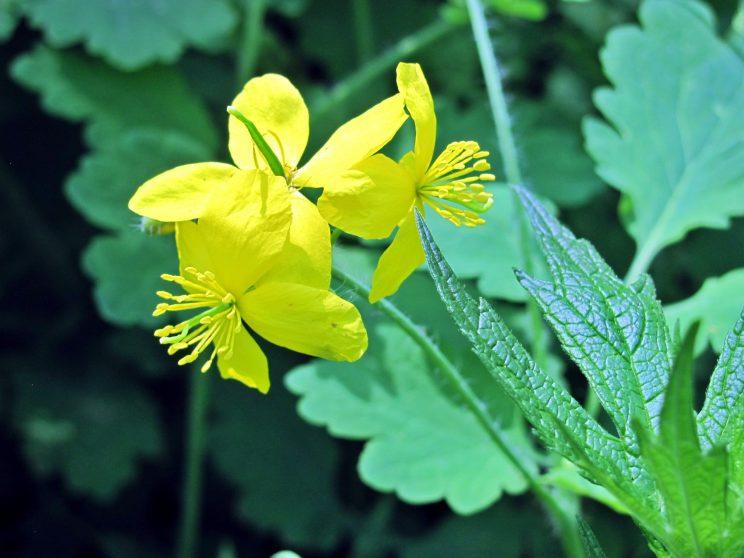 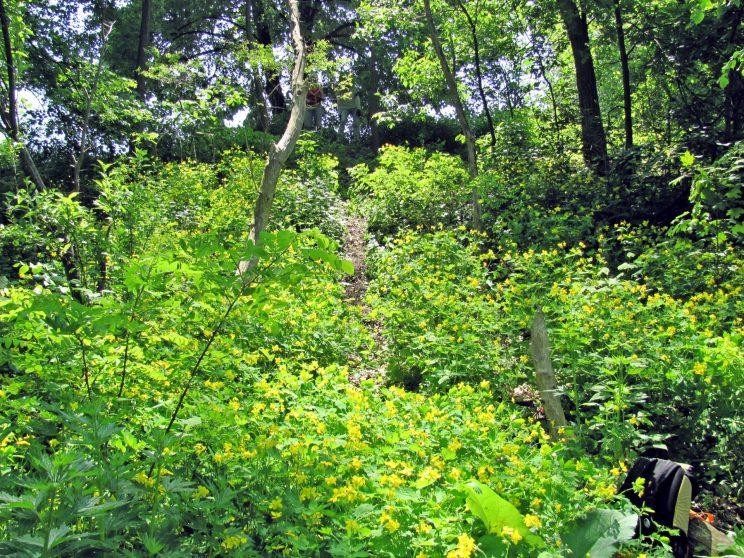 Celandine is a biennial (sometime a short-lived perennial) wildflower introduced to North America from Europe in the 1600s for medicinal purposes and is still available in some nurseries as an ornamental. It is commonly found in woodland edges, roadsides, farm edges and waste areas and is becoming increasingly established in Ontario.

Celandine can tolerate most soil types, thriving in its preferred rich, moist soil. Stems grow up to 80cm with the best identification trait being the orange-yellow colored juice or sap contained in leaves, stems or roots that will stain clothing and cause skin irritations in some people. Flowers are yellow, 4-petalled with multiple stamens and appear in May to June. Ants are known vectors of dispersal, attracted by an elaiosome on the tiny black seeds. Elaiosomes are fleshy growths rich in proteins and fats attached to the seeds of many plant species and are favored by ants as larvae feed.

Japanese knotweed is among the most damaging invasive plant species in North America. Originally a garden escapee for use as a screen plant and still propagated at many local nurseries, it can be found in a wide array of disturbed habitats including woodlands, roadsides, lakeshores, fields, meadows, brownfields and other waste places. It is also known to wreak havoc along natural watercourses where seasonal flooding and subsequent erosion disturbs the root systems, dislodging rhizome fragments, transported and deposited downstream to colonize new habitats. In fact only 2cm of rhizome is needed for a new plant to establish.

Flowers are greenish-white, blooming July to September and are found in panicles in the upper leaf axils. Stems can be up to 10’ tall, mottled reddish-purple and mostly hollow. Young shoots are a fantastic edible cooked and served similar to asparagus. Widely spreading and deeply penetrating rhizomes are largely responsible for its success and proliferation, not its infrequent seed crop. These highly aggressive rhizomes can spread up to 60’ from the host, sending up root suckers along its course. Left unmanaged, Japanese knotweed will form dense groves choking out and eliminating native flora in natural areas, threatening biodiversity and impairing local infrastructure in urban areas. 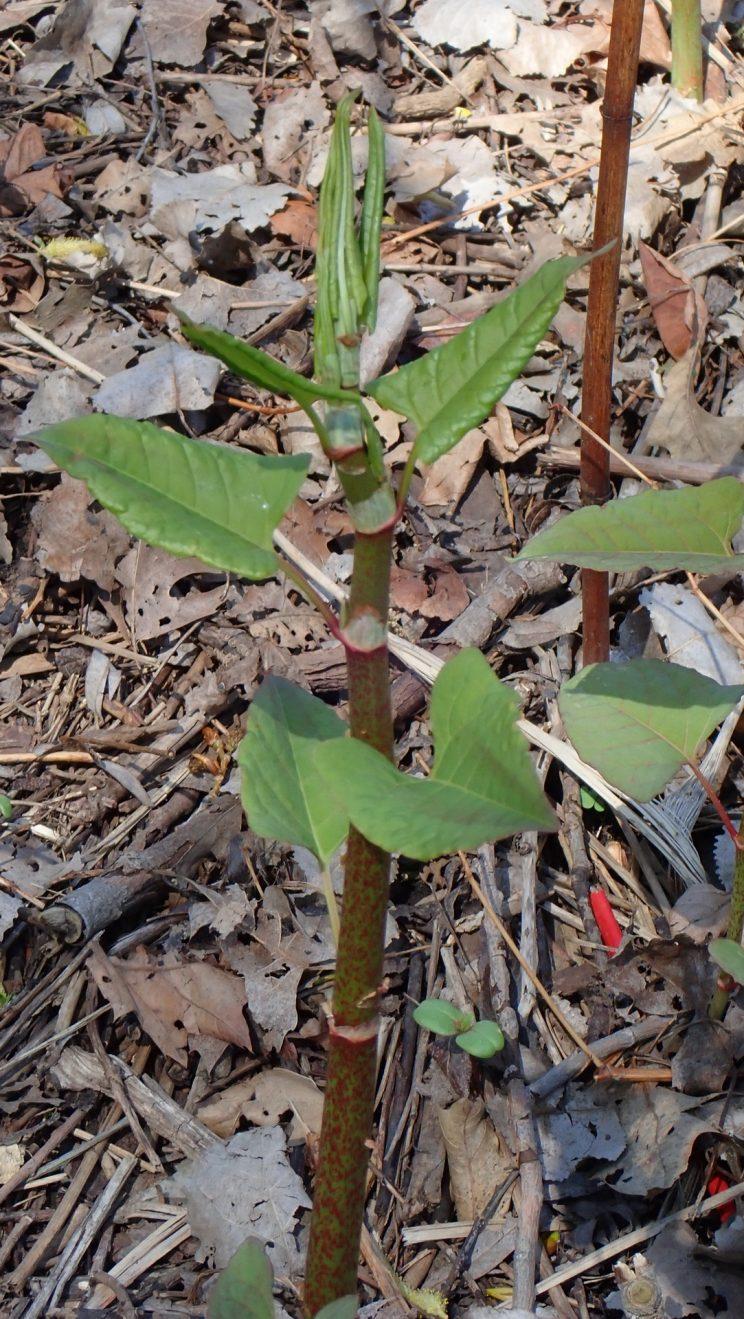 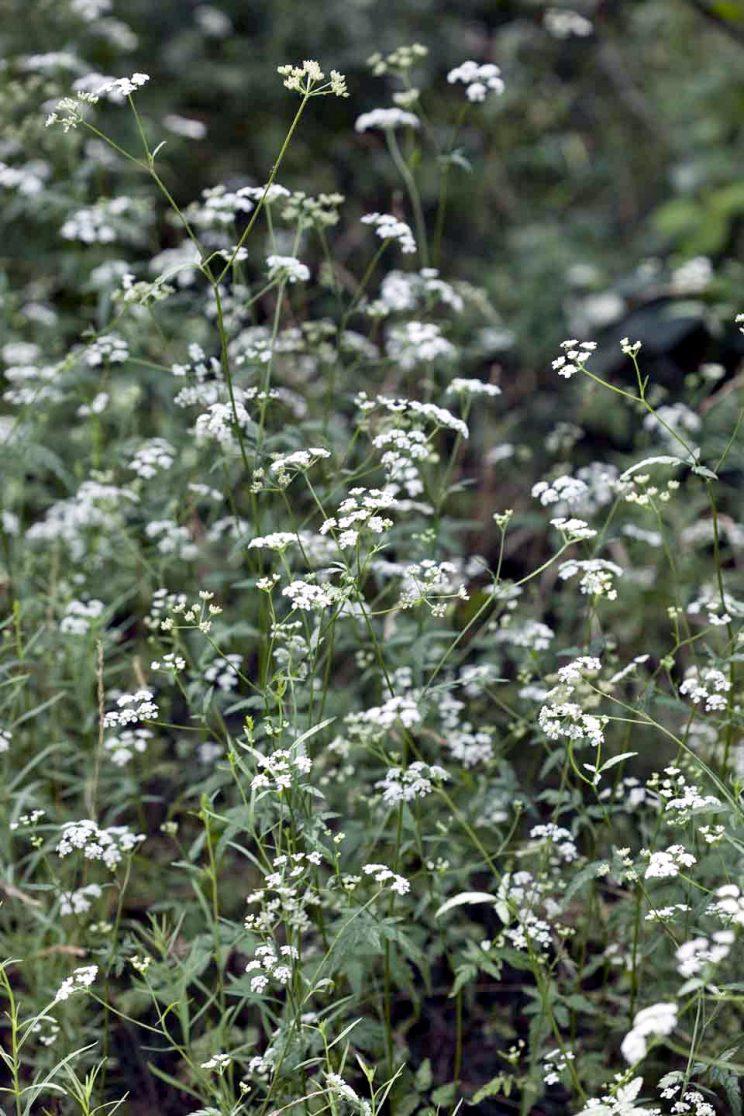 Hedge Parsley has come to High Park more recently – in summer 2010 the first efforts were made to pull it. Spreading Hedge Parsley is a parsley-like biennial with a taproot and erect, ridged stems. They grow in a spreading form up to 3 feet/1m in height. Leaves are triangular shape in outline and a fern-like in appearance; alternate, pinnately divided, 2 to 5 inches long and may be slightly downy on the upper surface. The tiny, white flowers are clustered in small, open, flat-topped umbels. Its flowers attract many insects, including bees, flies, wasps, and beetles. The caterpillars of the butterfly Papilio polyxenes asterias (black swallowtail) also feed on the foliage (Illinois Wildflowers, 2011).

Similar to the Japanese hedge parsley (another invasive plant), spreading hedge parsley lacks bracts at the base of the umbel structure. The small fruits are covered in velcro-like hairs, which attach to clothing and fur, or catch the wind, readily dispersing seeds. Hedge parsley matures quickly and re-seeds itself, usually forming dense colonies that can out-compete native vegetation. Pulling manually or mowing prior to flowering, easily controls spreading hedge parsley. Treating foliage with an herbicide is effective if done early in the spring or on re-sprouts after cutting.

The High Park Stewards and the prescribed burn that took place on April 29, 2022 are both featured in an article by Emily Waugh in the Toronto Star. Read the article as it first appeared online or the Pressreader version…
END_OF_DOCUMENT_TOKEN_TO_BE_REPLACED

High Park’s cherry trees are blooming! Vehicle access is closed in the park. For more information, including a map of locations, virtual tours and accessibility information visit the City’s Cherry Blossoms webpage. Please take care to respect wildlife and their…
END_OF_DOCUMENT_TOKEN_TO_BE_REPLACED

Urban Forestry will undertake a prescribed burn in 4 locations in High Park on Friday, April 29. Be aware that the park will be closed to vehicles on burn day.  See notice below for details and map. Indigenous people, the…
END_OF_DOCUMENT_TOKEN_TO_BE_REPLACED

We are pleased to announce that the Grenadier Pond Wetland Complex has been given “Provincially Significant Wetland” status by the Ontario government. The evaluation summary, conducted by Toronto Region Conservation for the Ministry of Northern Development, Natural Resources, and Forestry, …
END_OF_DOCUMENT_TOKEN_TO_BE_REPLACED