Sculptures and Monuments in High Park

A number of monuments, memorials and sculptures have been erected in High Park. Some you may have passed and wondered about. Others you may not have noticed at all. Many are unidentified. Why were these particular works of art placed in High Park? Are they appropriate to a public park?

The Howard burial site/monument is located at the south end of the Park, near Colborne Lodge. When John and Jemima Howard deeded their 165 acre country estate, which they had called High Park, to the City of Toronto in 1873, one of the conditions of the deed was that they would be buried in the Park and that their graves maintained by the City in perpetuity. The City ultimately agreed to this condition and other terms of the contract, including a monetary consideration.

In 1875, the Howards designed and constructed their future tomb and monument near the Lodge, on an attractive site overlooking Grenadier Pond and the Lakeshore. It consists of a cairn or pile of stones to mark Jemima’s Scottish background. The cairn is surmounted by a marble pediment at the top of which is a Maltese cross (John was a member of a Masonic lodge and the Maltese cross was a Masonic symbol). A modest gravestone was later placed in front of the monument.

There can be no debate about the appropriateness of this particular monument in High Park. 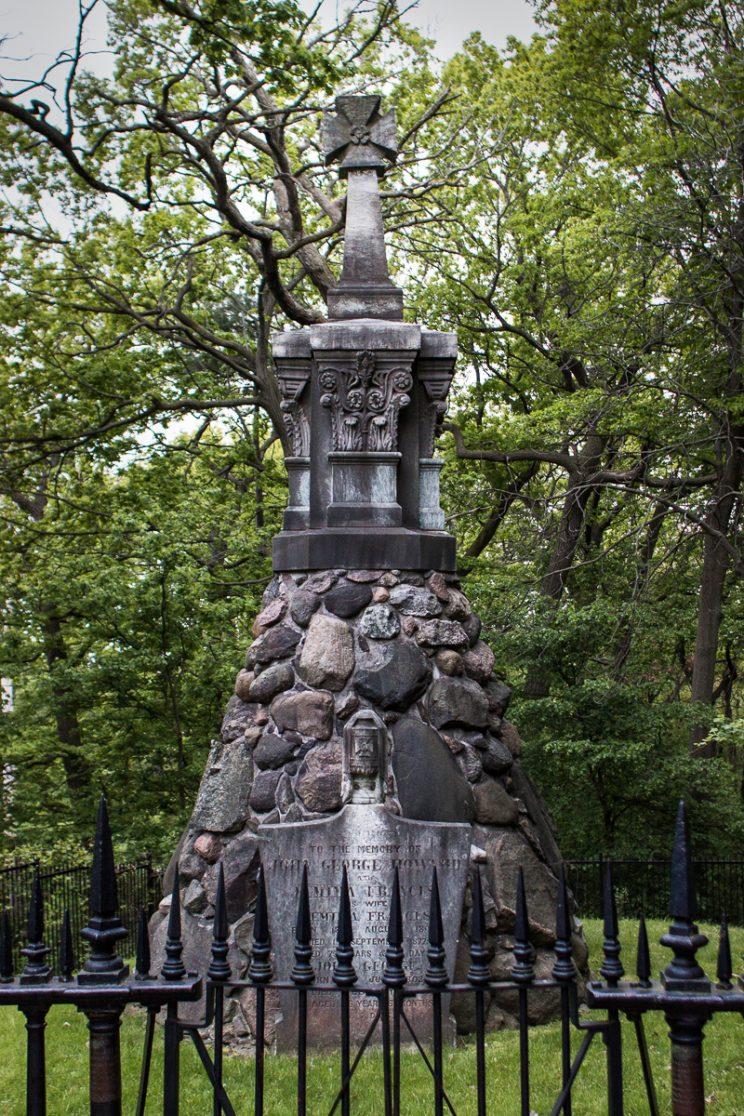 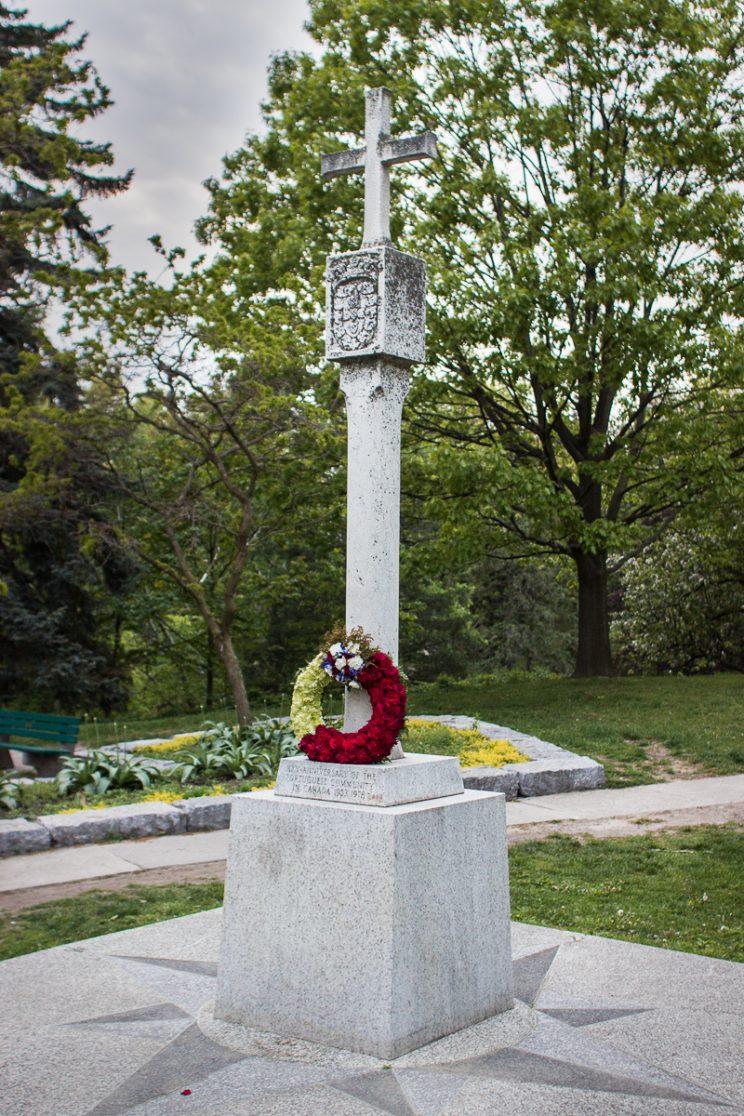 The Portuguese Monument stands near the centre of the Park just south of the Grenadier Café and Teahouse. It was originally erected in a back area on the north side of the restaurant in 1978 to mark the 25th anniversary of the establishment of the Portuguese community in Toronto. When the monument was moved to its present, more visible location, the surrounding terrazzo patio was replaced.

It consists of a terrazzo base with compass points surmounted by a granite plinth. The top part of the monument is a granite column on which sits a marble cross. Just below the cross, and beginning to weather somewhat, is a series of lines written by a 16th Century Portuguese poet, Luis Vaz de Camoes. The epic poem, in the original language, celebrates the exploits of legendary Portuguese explorers and adventurers.

This sculpture is located in a prominent spot opposite the Grenadier parking lot on the east side of Colborne Lodge Drive, near the entrances to Dog Hill and the Canadian Stage Dream Site. It was erected in the fall of 1975 (The International Year of the Woman) to commemorate the Ukrainian poet and playwright, Lesya Ukrainka. High Park was chosen “because it was convenient” and because there was (and still is) a large Ukrainian-Canadian Community living in the neighbourhood of High Park.

Lesya Ukrainka was the pen-name of Larysa Petrivna Kosach-Kvitka. She was born in Ukraine in 1871 at a time when Ukraine was part of the Russian Empire and began to write poetry in her native tongue at an early age. As she matured, she contributed dramatic prose, articles of literary criticism and social-political essays, again in Ukrainian, and her work began to reflect a demand for human rights and national freedom. Because the Russian Government at the time prohibited publication in the Ukrainian language and also the risk to her personal safety due to the subject matter itself, she published under her pen-name. Always of delicate health, she died of tuberculosis at the young age of 42.

The bronze sculpture is erected on a granite plinth on the front of which, besides her name in both Ukrainian and English, is written the words “The Greatest Ukrainian Poetess”. On the back panel there is some biographical data and the name of the sculptor, Mykailo Chereshniovsky.

Originally, the sculpture stood in the open. However, inner and outer fenced enclosures have since been installed in attempts to prevent unleashed dogs from “paying their respects” to Lesya.

One could make a case for honouring an early freedom fighter to whom a lot of the local community could relate. (At the time the statue was erected, Ukraine was part of the USSR.) Were Lesya alive today, she would certainly have been out in front among the demonstrators in any controversy involving Ukraine.

We now come to a group of sculptures which seems to cause a lot confusion and comment. Some are situated on the hill (Sculpture Hill) bordering the nature path south and east of the Forest School building [which is now home to the High Park Nature Centre] . Others are north and west of the building itself. Where did they originate? What do they represent?

It all began in 1967, Canada’s Centennial Year when it was decided to hold an International Sculpture Symposium in Toronto with High Park as the venue. Interest was solicited from around the world and ultimately 12 international artists were selected including four from Canada. The artists all came to Toronto and worked on site, using the former Forest School to store their tools and gear.

In the end, ten sculptures were completed. Three of them soon went to the National Gallery in Ottawa, the McMichael Canadiana Collection in Kleinberg and the Art Gallery of Ontario. Let us examine those that remained in place in High Park. 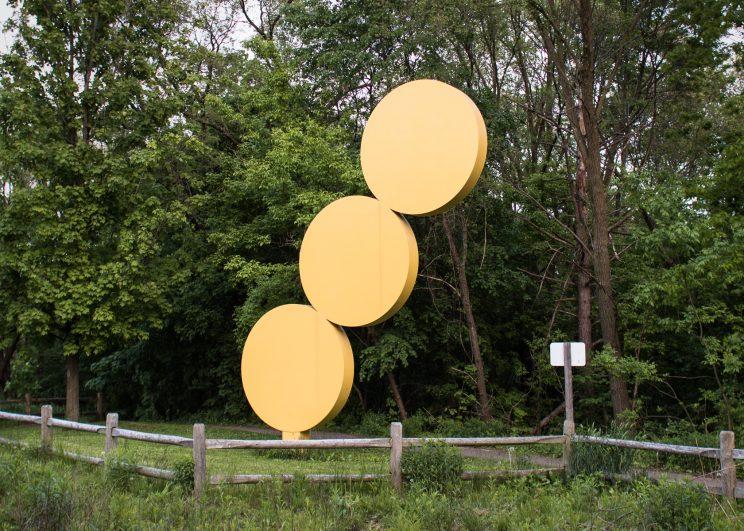 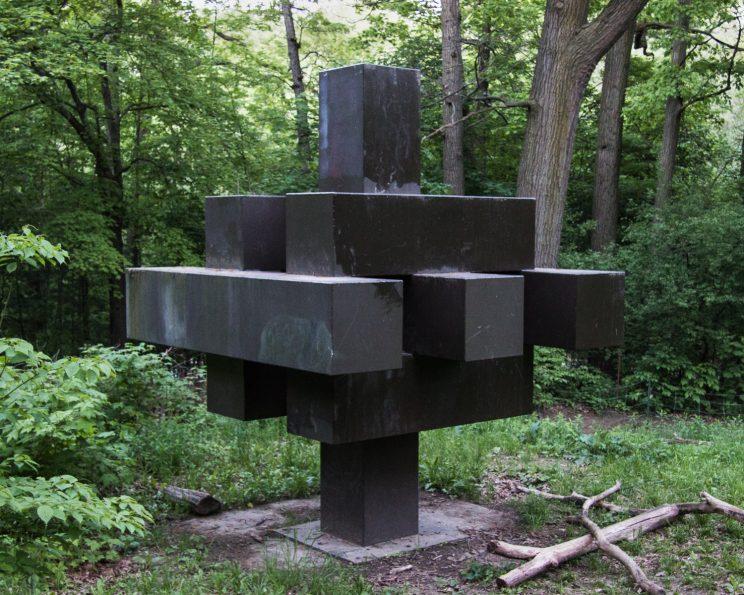 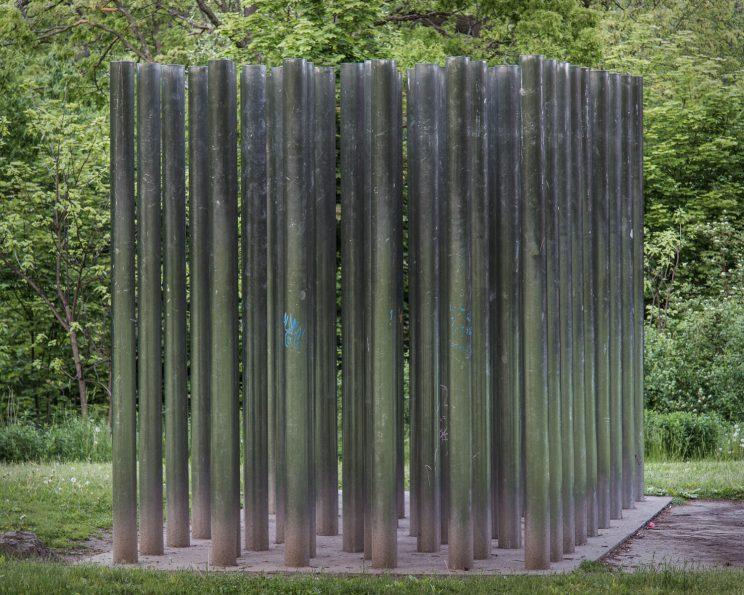 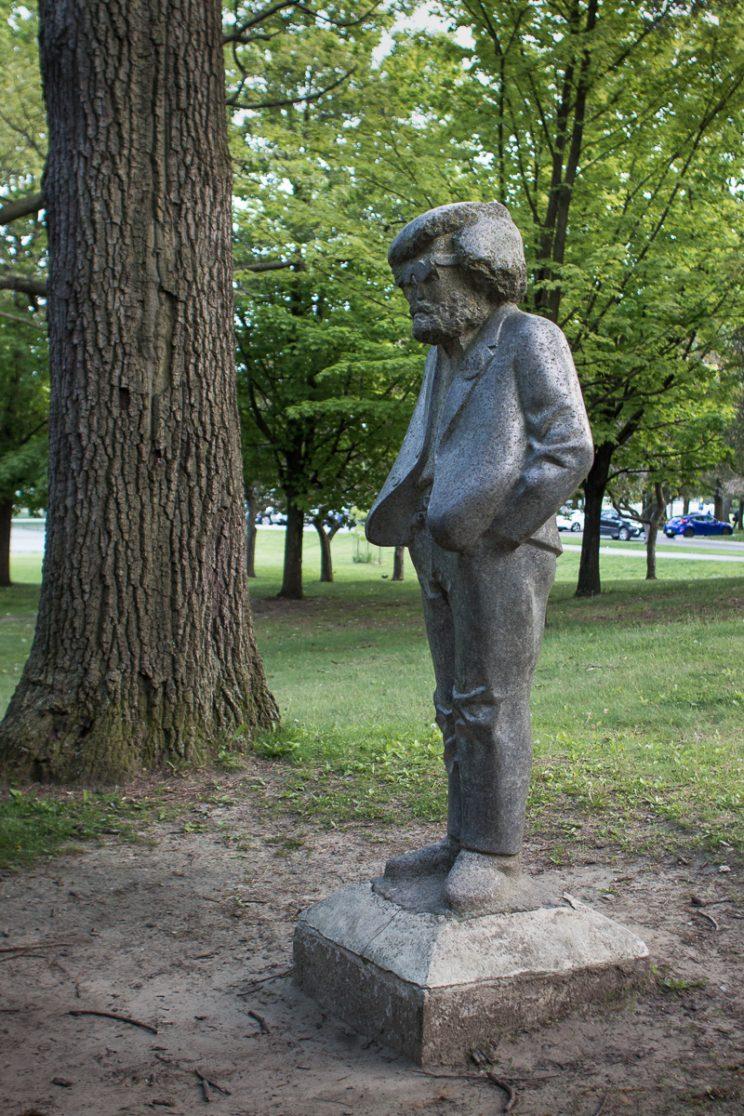 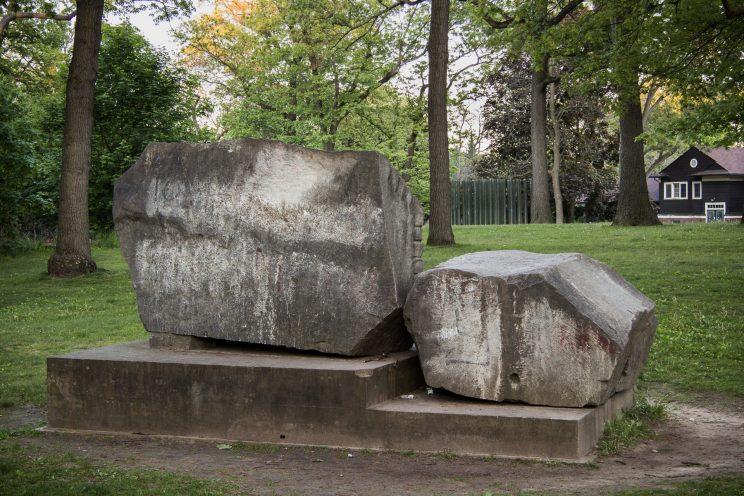 “No shoes” by Mark di Suvero, an American artist. This structure is constructed from steel I-beams bolted or welded together and painted orange (The title reflects the era – the hippy years.) The original sculpture was fitted with four free-swinging logs, perhaps relating to the surrounding trees. In time, these logs were removed and what was left fenced off because of the safety risk. [NOTE: This sculpture was removed from High Park in 2010 and has been restored and installed at Corktown Common.]*

“Flower Power”, at the top of the hill, also by di Suvero, and, again, reflecting the 1960s. Originally, it consisted of two interlocking triangles, the top one inverted, the whole held in place by cables under tension. [NOTE: This sculpture was also removed from High Park in 2010 has been restored and now overlooks railway tracks from the CityPlace condo complex.. READ MORE  and MORE]

“Three Discs” by Menashe Kadishman, an Israeli. This sculpture is sited south of the second di Suvero sculpture. It consists of three cantilevered, contiguous metal discs painted yellow. It is an inviting target for graffiti artists but seems to remain untouched most of the time.

“November Pyramid” by Bernard Schottlander, a German artist, living in England at the time. Made of painted steel plates – great for children to climb on. Some years ago, someone painted the sculpture a vivid blue colour! Parks Maintenance staff quickly restored the sculpture to a neutral dull-brown colour.

“Mid-summer Night’s Dream” is the work of Wessel Couzijn, a Dutch sculptor. It is located on the hill near the Forest School. It takes a little time to realize that you are looking at concrete male and female figures facing each other, presumably doing what lovers sometimes do in the Park!

“Temple” by Hubert Dalwood, a British artist, is located north of the Forest School. This is a collection of stainless-steel pipes fixed to a base and it remains in good condition.

“The Hippy” by William Koochin, a Canadian sculptor, is located at the west end of the Forest School. This sculpture is carved from a piece of granite and, again, has a title appropriate to the sixties.

And, of course, we can’t leave without mentioning the unfinished sculpture, located at the corner of Spring Road and Colborne Lodge Drive. This particular project was begun by a Toronto artist, Irving Burman, who had two blocks of granite delivered to the sculpture site. Unfortunately, Mr. Burman suffered a breakdown and neither he nor anyone else had any idea of what he had intended to create! The City later prepared a base for the two pieces in an arbitrary orientation. Besides providing a convenient climbing spot for children, it’s fun to speculate what the artist originally had in mind – beavers chewing down a tree, caribou fording a river, your guess!

Are these monuments, sculptures and other artworks appropriate to a public park?

In a word, the answer is "yes"! These works of art have been in High Park for some time and we are not suggesting that any be removed. However, they should all be clearly identified.

Other pertinent questions are: do we want to see more monuments and works of art in High Park? And, if so, what acceptance criteria should there be regarding subject and location? Are some subjects or themes more acceptable than others? What are your thoughts?

Other Artwork and Memorials

Lott Memorial Fountain: The fountain and surroundings at the northeast corner of High Park was presented to the City in the 1960s by a local resident, Ernest D. Lott. For many years, it was enjoyed by people, dogs and wildlife. Then the structure began to deteriorate and the fountain was shut down. Funds have since been allocated to rebuild the site, again with a drinking fountain and a water feature. With complementary plantings of trees, native grasses and wild flowers, it is once more an attractive entrance to the Park.

The Labyrinth: This feature, located on the tableland north of the Grenadier Restaurant, was installed in 2000. A labyrinth is an ancient symbol dating back hundreds of years designed for walking, meditation and relaxation, a memorial of sorts. Labyrinths can be found in many parts of the world including France, Sweden, England and India. In this case, local enthusiasts painted the convoluted walking path on a concrete base, thought to once have been part of a carousel. It is a copy of a labyrinth found in a 13th Century Cathedral in Chartres, France.

Memorial Gateway: at the High Park Boulevard entrance to the Park. This impressive stone structure, complete with exotic lighting, was erected in 1913. The inscription on the gate reads:

THIS MEMORIAL GATEWAY IS DEDICATED TO THE LATE JOHN G. HOWARD FOUNDER OF HIGH PARK BY THE WESTMINSTER CHAPTER OF THE IMPERIAL ORDER DAUGHTERS OF THE EMPIRE AND THE CORPORATION OF THE CITY OF TORONTO DECEMBER A. D. 1913

The article originally appeared in two issues of the publication "High Park News" - Spring 2005 and Summer 2005. This was the newsletter of the High Park Community Advisory Council (formerly known as the High Park Citizens' Advisory Committee, no longer in operation). Ron Allan was also the editor and Lisa Kemp provided Design and Layout.

The High Park Stewards and the prescribed burn that took place on April 29, 2022 are both featured in an article by Emily Waugh in the Toronto Star. Read the article as it first appeared online or the Pressreader version…
END_OF_DOCUMENT_TOKEN_TO_BE_REPLACED

High Park’s cherry trees are blooming! Vehicle access is closed in the park. For more information, including a map of locations, virtual tours and accessibility information visit the City’s Cherry Blossoms webpage. Please take care to respect wildlife and their…
END_OF_DOCUMENT_TOKEN_TO_BE_REPLACED

Urban Forestry will undertake a prescribed burn in 4 locations in High Park on Friday, April 29. Be aware that the park will be closed to vehicles on burn day.  See notice below for details and map. Indigenous people, the…
END_OF_DOCUMENT_TOKEN_TO_BE_REPLACED

We are pleased to announce that the Grenadier Pond Wetland Complex has been given “Provincially Significant Wetland” status by the Ontario government. The evaluation summary, conducted by Toronto Region Conservation for the Ministry of Northern Development, Natural Resources, and Forestry, …
END_OF_DOCUMENT_TOKEN_TO_BE_REPLACED