All monarchs are little flying miracles of nature’s genius, but when you see a High Park monarch in late summer, you behold a most astonishing creature. These monarchs are the super flyer generation about to migrate several thousand kilometers to Mexico, one of the longest insect journeys on earth! 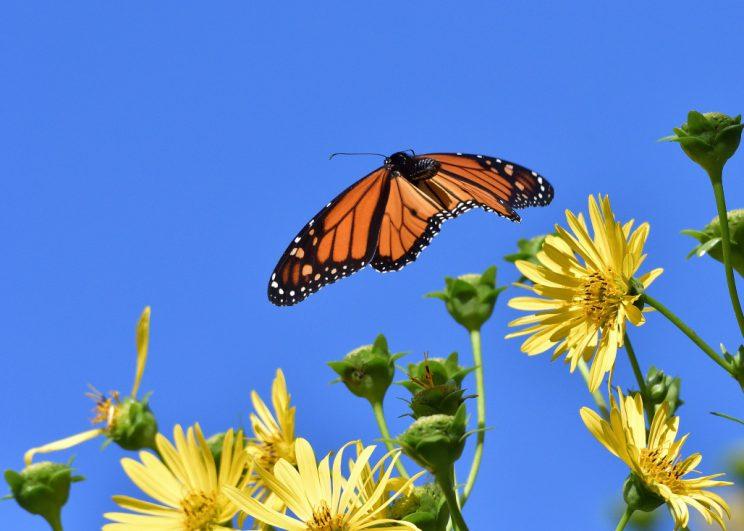 In late summer, each female lays hundreds of eggs, glued one at a time, one per plant, on the underside of milkweed leaves. Three to five days later, a minute grey caterpillar hatches hungry and devours its egg shell and then the leaf. It is already growing and storing energy for its metamorphosis from caterpillar to butterfly. Over the next ten days or so, it eats milkweed constantly, increasing its size 3,000 times! All the growing that happens in the monarch’s life happens in the caterpillar phase.

A few days after hatching, the pale little caterpillar acquires its distinctive yellow, black and white stripes as a warning to birds that it is a bad tasting and poisonous meal. Every few days, it discards its outgrown skin and often makes a meal of it. In its fifth and final skin, the caterpillar seeks out a safe place and anchors itself to the underside of something. It hangs upside down J-shaped, to form a chrysalis inside its last skin.

Why is Milkweed Essential to Monarchs?

Monarch butterflies lay their eggs on milkweed, nature’s intended food source for monarch caterpillars in the wild. This plant contains the toxin cardiac glycoside which causes no ill effects to the monarch caterpillars or butterflies but can have terrible consequences for predators that try to eat them. Many birds are warned off of eating monarchs because they taste bad. After an initial bad experience, the birds avoid the memorable colour patterns of the caterpillar’s black, yellow and white stripes or the butterfly’s bold orange and black wings.

There are 106 known species of milkweed, but only about 12 are used by the monarch. Some of these milkweed varieties have a higher concentration of the toxin, and their effect on predators is much worse, causing severe reactions and even death. The milkweed that grows in the southern US has the highest concentration of the toxin, which helps protect the monarch caterpillars from being eaten by hungry spring birds or being fed to their hatchlings. High Park’s most abundant milkweed species, Asclepias syriaca, contains lower concentrations. It is a big broad-leafed common milkweed that grows north of the 35th parallel. Plant some in your own garden and attract monarchs to your home!

Genetic magic transpires within the chrysalis as the caterpillar transforms into a butterfly by changing just about everything. Wings sprout from buds of thorax tissue and reproductive organs appear. The multiple sets of short leaf-grabbing legs disappear, and six long jointed legs form. As the jaws of the leaf-chomping caterpillar dissolve, new adult nectar-sipping mouthparts develop. The long intestine formerly needed to digest leaves shrinks to accommodate the future nectar diet. The caterpillar’s six pairs of simple eyes are replaced by two enormous compound eyes and two long delicate antennae form. In the beginning, the chrysalis looks like waxy pale green jade but gradually becomes transparent to reveal the black and orange wings of the adult monarch.

After about ten days, the monarch butterfly splits open the chrysalis and struggles free. Although it has four wings and six legs, it barely resembles a butterfly. Its liquid-filled abdomen is huge, and its wings are merely compressed stubs. Grasping the empty chrysalis shell with its tiny pincer feet, it begins pumping fluid through its wing veins. The wet and crumpled wings begin to unfold, enlarge and dry out. In about three hours, the wings are open fully and ready for flight.

Nectar Seeking and Sipping from Heat to Toe

The new monarch is not a fussy eater. In late summer, favoured High Park sipping sites include the flowers of cup plant, goldenrod, asters and ornamentals such as zinnias and butterfly bush. First, Monarchs see the flowers with their compound eyes. Next, they smell the flowers with their antennae and finally they zero in on the nectar source by using their feet. They can taste a plant just by standing on it! Once in sipping position, the butterfly uncurls its long mouth tube or proboscis which sucks the nectar up like a straw. High Park monarch generations that emerge before late summer, live only two to six weeks, flitting between flowers and sipping nourishment they’ll use for mating and egg laying.

The Departure of the Super Flyer Generation

The migrating super flyers that emerge in High Park in late summer, store the nectar nutrition as fat because they must make it last for eight months of overwintering, 4800 km of flight and eventual mating and egg laying.

When the days shorten and the temperatures cool, the monarchs of High Park join millions of other migrating monarchs that spend summer east of the Rockies and winter in Mexico. The starting points of these migrating monarchs span across more than 3000 km, but their journeys end within 80 km of each other. The High Park monarchs fly directly to their wintering grounds, exiting Ontario and passing through Pennsylvania, Ohio, Kentucky, Tennessee, Alabama, Mississippi, Louisiana, and Texas before reaching the Oyamel Mountains in Mexico.

How do they find their way?

Scientists believe monarchs likely use the sun to navigate. With their antennae, they determine the location of the sun in the sky to establish the time of day. In the morning, the Mexico-bound monarchs keep the sun on their left and in the afternoon, on their right. In addition, they might also be able to use minerals in their bodies to sense the earth’s magnetic fields and detect north just the way a compass needle does.

Making it to Mexico

On their seemingly delicate wings, they fly between 80 and 160 km a day on a course they have never seen before. The longest distance ever recorded for monarch travel in a single day is over 400 km! More join the migration every day, some as part of a growing stream of monarchs, yet each one flies independently on its own. They do not travel together as flocks of birds do. Each monarch can carry only enough fuel to flap its wings for ten hours of flight so there is no way they can flap the six to ten weeks it takes to reach Mexico. To conserve their energy, they catch rides on southward moving air currents that rise up over warmed landforms. Radar has detected monarchs floating as high as a kilometer and a half!

The monarchs come down to earth around three o’clock each afternoon when the land starts to cool and the warm air currents end. The monarchs amass in trees to rest for the night. Although each individual monarch weighs less than a gram, thousands together actually cause branches to bend. In the morning the monarchs open and close their wings in the sunshine to warm up their muscles for another day of flying. They are very limited to specific flying conditions. It must be sunny, warm and not too windy. They cannot fly when temperatures fall too low but neither can they fly when it’s too hot and they risk overheating and drying out. Unfortunately, climate change has meant more extreme weather events now interfere with monarch survival.

In early November, the monarchs reach their final overwintering destination in the remote mountains of the Oyamel Forest. They gather at different sites on steep mountain slopes over 3,000 metres high. Food is scant and the temperatures are chilly, often hovering around zero Celsius. Why has nature arranged for such an inhospitable winter home?

It turns out this seemingly hostile environment is actually the perfect microclimate for monarch survival. Although the cool temperatures are just high enough that the monarchs won’t freeze, the coolness also means they are unable to fly. Because they are inactive, they don’t really need to eat. So, thousands of monarchs hang together for warmth in the fir trees. They remain mostly immobile to preserve the fat stores needed for their return migration, mating and egg laying. When the temperatures fall below freezing, the butterflies are still safe because this special forest protects them. The large trees grow close together with overlapping branches that keep out winter storms and ensure the monarchs don’t get wet. The big tree trunks hold heat and the size of the forest creates its own gentle moisture by holding fog and cloud cover so the butterflies don’t dry out. When it is sunny and warm enough, the monarchs visit a nearby stream or merely drink dew from the ground. Anytime they are away from the tree branches it is dangerous for them. There are predators on the ground and if butterflies happen to get wet, they are at high risk of freezing. Monarchs can survive temperatures of -7 Celsius when they are dry, but if they get wet, they will freeze at just -1 Celsius.

About the second week of March, the longer warmer days signal the monarchs to leave the forest and head north the way they came. The super flyers from High Park that have already flown 4,000 km and lived seven months, have to fly about 800 km more. Their wings are tattered, their fat stores low and they are ready to perform their final act of species survival. The females mate and head to Texas or Louisiana near the Gulf Coast. There they will lay their eggs and die, ending the long astounding lives of the monarch super flyer generation that left High Park eight months earlier.

The return migration north works like a relay. When the eggs of the super flyers hatch in the southern US, the caterpillars will eat milkweed and become chrysalides that become butterflies. These butterflies will fly north for about a month and mate along the way. The cycle repeats several times from one milkweed colony to another until the final relay group reaches their summer home. Our High Park monarchs arrive in late spring just as the milkweed has started to grow. They will feed on whatever nectar source is available, including dandelions. The summer generations of monarch butterflies will seek blooms such as blazingstar, milkweed and cup plant. The eventual generation of late summer-born High Park monarchs will be separated from the previous year’s super flyers by four or five generations and they will make the same long trek to Mexico, sight unseen.

Since the High Park Nature website was first launched in 2010, it has provided a wealth of information about the natural features of High Park. Now we are pleased to present our new WordPress site – designed to perform well…
END_OF_DOCUMENT_TOKEN_TO_BE_REPLACED

“We love High Park for its natural beauty. Will that love be the death of it?” Read the article or The Star Pressreader version
END_OF_DOCUMENT_TOKEN_TO_BE_REPLACED

The most recent High Park Christmas Bird Count was held on Sunday, Dec. 15, 2019 (a very windy day). The High Park route ended up with 43 species, our lowest since 2007. Dark-eyed Junco and Rock Pigeon numbers were the lowest…
END_OF_DOCUMENT_TOKEN_TO_BE_REPLACED

There were over 280 participants (between 110 individuals coming at least once) who came out to High Park Stewards field restoration events. The average number of Stewards that attended each event was 22. Together Stewards contributed to over 575 field…
END_OF_DOCUMENT_TOKEN_TO_BE_REPLACED
TwitterFacebookEmailReddit
Skip back to main navigation