When people think of the pre-European settlement landscape of Ontario, they often think of forests. However, historical records show that a significant portion of Southern Ontario was actually prairie and savannah habitats. This is a little known secret because so much of these landscapes were transformed into agriculture.

The fertile soils and the ease at which prairies could be cleared compared to heavily forested areas made them prime candidates for farming and settlement.

Prairie grasses have extensive root systems which help them survive drought. In addition to storing carbon dioxide (CO2) in their roots, these species are also provide critical habitat for a number of rare bird and butterfly species, which have had their habitats mostly destroyed in Ontario.

Did you know that 65% of the biomass of tallgrass species is actually in their underground roots?

Read on to find out more about four of the most common tallgrass prairie species found in High Park.

The native prairie grass species found in High Park are "warm season" grasses, that is, they don't start growing until the ground is warm. By contrast, popular turf species are "cool season" grasses, thriving in cooler weather and often going dormant in mid-summer heat. Since the cool season grasses start growing first in the spring, it is hard for the native warm season grasses to compete. Prescribed burns help to open up areas previously dominated by turf grasses,  giving native prairie grasses a better chance to thrive.

This is one of the most dominant grasses in typical Ontario prairies. It is also called “Turkey Foot”, because of the similarity that its triple spiked ends have to, you guessed it, a turkey’s foot. This grass, which can be found in both wet and dry prairies, can grow higher than three metres! It’s leaves are dull and long, and it turns shades of red, brown and deep purple.

This is a shorter grass in prairie terms, growing just to a height of 1.3 metres usually. In contract to Big Bluestem, it only exists on drier sites. It can be recognized by its feathery look, which gives it its Latin name (scoparium means broom). Watch for it to turn a mixture of tan, brown and wine-red in late summer and fall.

Like Big Bluestem, Indian Grass is often widespread and dominant in prairie communities, and can grow in both wet or dry sites. Another similarity to Big Bluestem is its massive height, up to 2.5 metres. It flowers in late summer and early fall, and when mature, is a beautiful gold.

This is a tallgrass prairie species; a native perennial which grows in bunches 2 to 6 feet tall. The gold/brown coloured grass has a long plumed head often bending with its weight, with coarse thick bristles that curve outwards. Canada wild rye grows over most of the North American continent, except the extreme southern and eastern regions. It acts as a native nurse crop, growing on disturbed sites, but not competing with other species, and provides erosion control. Birds and small mammals use it for seed and forage and as cover.

Wildlife and humans both appreciate the flavour and nutritious benefits of Canada wild rye, as rye can be used in rye whiskey, bourbon or vodka - or even bread.

adapted from an article by Jane Schmidt

Switch Grass (also known as Panic Grass) - along with Big Bluestem, Little Bluestem and Indian Grass - is one of the "big four" prairie grasses. It produces a large biomass, and unlike corn it does not need to planted every year. That's why this plant is being investigated for its potential as a renewable energy source!

Switch Grass grows up to 2 m high and stays upright through the winter. From July to September, masses of the distinctive open lacy seed heads appear like a haze.

There is no historical record of this species occurring in the park. It grows naturally on the Toronto Islands where the sandy soils are less acidic. Switch Grass has been planted in High Park as an example of a tallgrass species. 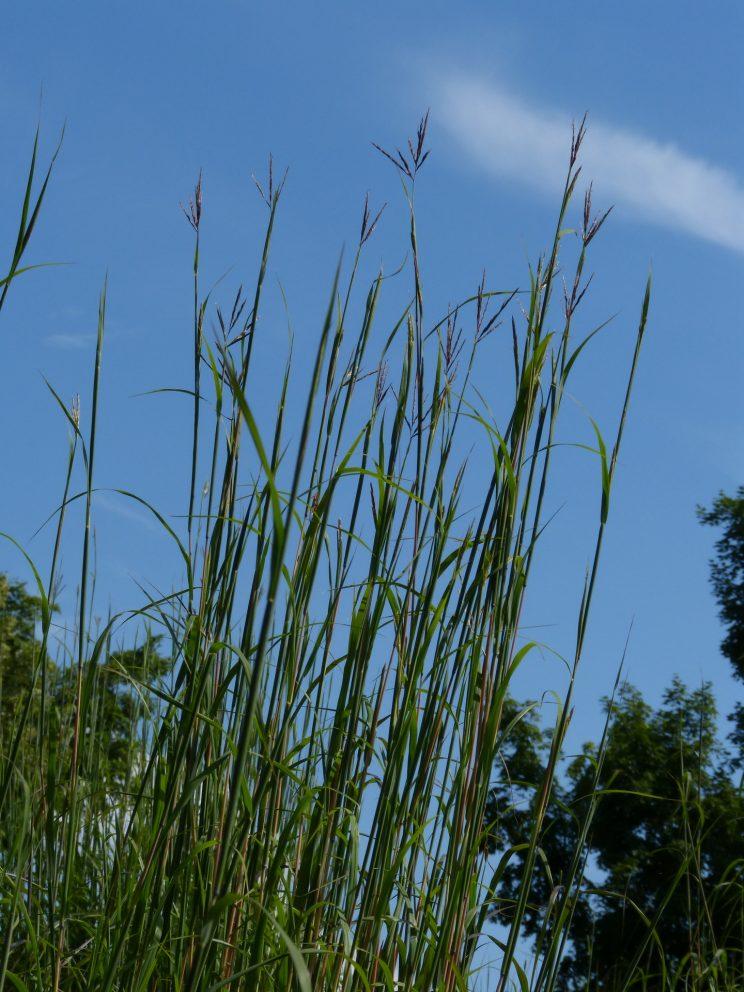 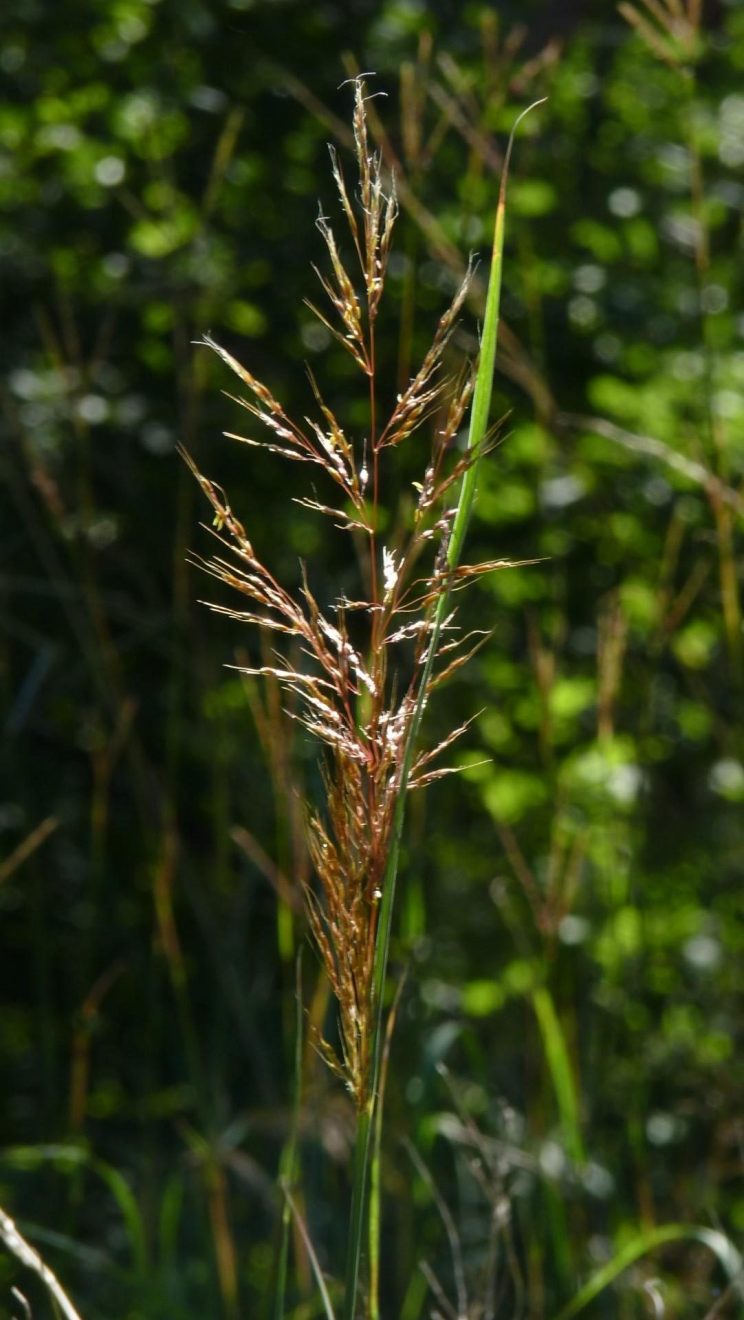 Sedges are in the group of plants that are described as "grass-like". One of the easiest ways to differentiate  grasses, sedges and rushes is the stem (or "culm"). The stem of grasses is mostly hollow. The stem of sedges is solid and usually three sided. “Sedges have edges” reminds you of this fact. The stems of rushes are solid and rounded.

Most sedges grow low to the ground, usually in standing water or where water is just below the soil surface. But there are exceptions! The High Park's savannahs support prairie sedges that flourish in dry, sandy soil.

adapted from an article by Jane Schmidt

This plant is the dominant ground cover of the oak savannah, growing to form a plush mat. The shadier the site, the lusher it becomes and the more it spreads. Also known as "Early Sedge", this "cool season" plant is one of the first to sprout green in the spring. Rising above the foliage, the rusty-coloured flowers bloom in April.

Hay Sedge shares Pennsylvia's fondness for drier conditions but prefers the less shady, open areas of the Black Oak Savannah where it dominates in large stands. It blooms in May and has long, narrow hair-like leaves. 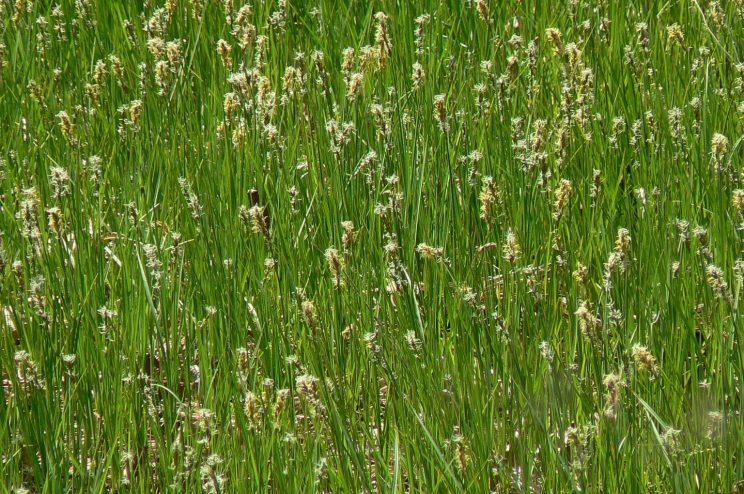 The High Park On-Leash Committee (HPOC) is a volunteer group composed of High Park Nature supporters, dog owners and concerned community members. The group’s mission is to encourage compliance with the dog-walking rules in High Park through education. The HPOC…
END_OF_DOCUMENT_TOKEN_TO_BE_REPLACED

High Park was sprayed for LDD Moth caterpillars (also known as Spongy Moth, previously called Gypsy Moth) in spring 2022. The first application took place on Saturday, May 28, the second one on Tuesday, May 31 and the final one…
END_OF_DOCUMENT_TOKEN_TO_BE_REPLACED

For at least a decade the High Park Natural Environment Committee (NEC) has been urging the City of Toronto to put an end to fishing at Grenadier Pond. The committee’s concerns are well documented in a series of letters to…
END_OF_DOCUMENT_TOKEN_TO_BE_REPLACED

The High Park Stewards and the prescribed burn that took place on April 29, 2022 are both featured in an article by Emily Waugh in the Toronto Star. Read the article as it first appeared online or the Pressreader version…
END_OF_DOCUMENT_TOKEN_TO_BE_REPLACED