Hawk Hill in Toronto's High Park has the distinction of being one of the very few major raptor monitoring sites operating in the centre of a large urban environment. It is one of three sites in the Greater Toronto Area that participate in the Greater Toronto Raptor Watch to observe the fall migration of hawks and other raptors. 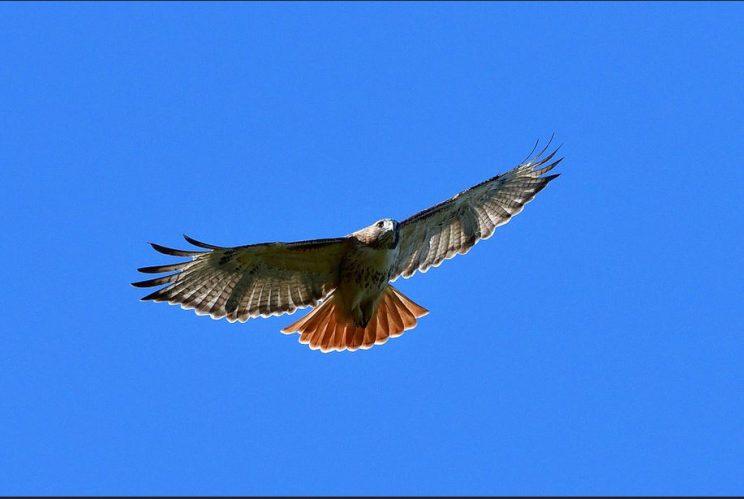 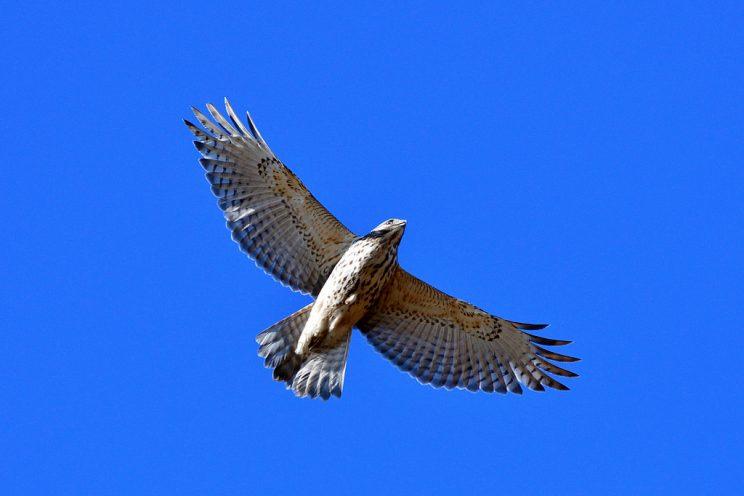 Hawk Hill is located at the centre of High Park on a small knoll just north of the Grenadier Restaurant.

The elevation is 112 metres. This is 38 metres above Lake Ontario, which is 1.25 kilometres to the south.

Observers in High Park are seeing autumn raptor migration which consists of southbound birds which, on meeting the obstacle of Lake Ontario, turn westward and follow the Lake Ontario shoreline. The location of distinct incoming raptors is often described by their position over the background of the downtown Toronto office towers and minutes later by their position over the tall Oaks and Pines of High Park.

While the primary objective of the hawk watch is to enjoy and monitor the fall raptor migration, there is a public participation element which is encouraged and respected. In all years there has been an enthusiastic group of observers contributing to the spotting, identification and counting of incoming raptors. Hawk Hill benefits from the size and the quality of the surrounding parkland habitat and also the encouragement and support of the Toronto Parks Department.

Weekly totals throughout the season are posted on ONTBIRDS. Monthly species daily totals which meet the Toronto Ornithological Club reporting guidelines are forwarded to the Records Committee for inclusion in their database.

Hawks generally fly when the winds are from the northwest. Keen birders monitor the weather report and come on good days.

There is generally a recorder from 10:00am on. On poor flight days this person will usually leave after a couple of hours.

The High Park Hawk Watch welcomes all visitors and active participants to what has become a very popular destination in High Park. 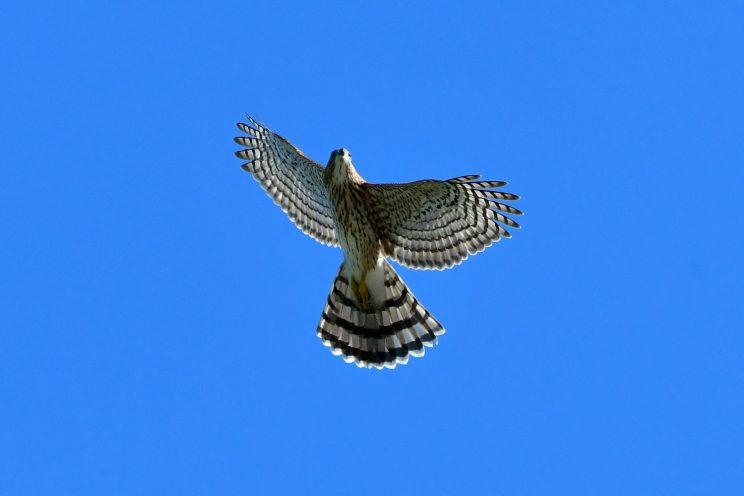 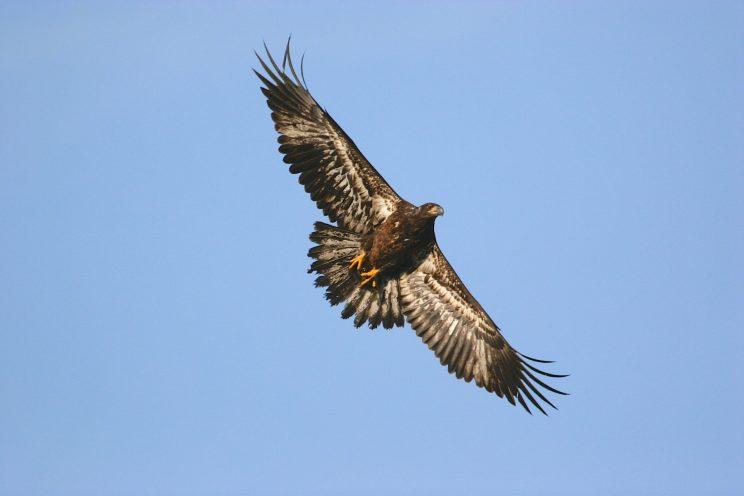 Pulling Numbers Out of Thin Air

Every fall in High Park, you can count on two things. Migrating birds will pass overhead and people will come to watch them do it. The watchers gather on Hawk Hill, a small bump of earth rising just north of Grenadier Restaurant. Although more than 150 different kinds of birds may pass through on their way south, people come to Hawk Hill particularly to watch raptors, the meat-eating birds of prey.

Raptors seen from Hawk Hill include:

While songbirds are hopping and hiding in the bushes, these raptors steal the show, large and steady in the sky, exhibiting their distinctive forms and flight styles.

Take the Cooper’s Hawk for example. These middle-distance flyers have short rounded wings and very long rudder-like tails for maneuvering through woodland canopies at high speed. Their flight style will catch your eye with a flap-flap-glide motion. In contrast, the Red-tailed Hawks with their longer, larger broad rounded wings and short wide tails are built for gliding. You will see just the occasional heavy wing beat from these birds soaring in wide circles overhead.

From September 1 to November 30, an official recorder spends each day on Hawk Hill. Other keen-eyed observers join the recorder with skyward gazes to spot, identify and count the raptors. Along with the data collected by more than 100 other North American Raptor observation sites, the weekly totals recorded at Hawk Hill are reported to the Hawk Migration Association of North America (HMANA). Cornell University is the final destination of all the data.

This important information alerts us to trends and changes in bird populations that signal problems. This very system informed the world in the 1970s of the drastic decline in young eagles and resulted in a ban on the pesticide DDT. While the data collection is official and invaluable, the main attraction to Hawk Hill is pure fun and wonder. Everyone is welcome and many people come to share in the adventure and excitement of tracking the birds on their annual fall migration.

Why Do They Leave in the Fall and Return in the Spring?

Migration to a warmer place is all about following the food, not about staying warm. Raptors eat animal protein. When cooler temperatures force these food sources (insects, mammals, reptiles, amphibians) into winter hiding for months of sleeping or eating stored reserves, the raptors must move to new hunting grounds. In their warmer southern haunts, these migrant birds of prey must share food and roosting sites with local resident birds. At that time of year there is enough to go around because both migrant and resident birds are feeding only themselves and not whole broods. However, come spring, the migrants must make the grueling trek back north where they will find plenty of nesting sites to choose from and many newly emerged animals to eat.

Turn Right at the Lake

Some raptors migrate great distances. For example, the Broad-winged Hawk flies more than 100 km a day for two months to cover 7000 km. Consequently, raptors use several strategies to prevent exhaustion. They often wait for a wind from the northwest. If the wind is blowing at the right angle, the extra push saves a lot of energy. They also take advantage of winds that blow against rising landforms, like the elevated southern edge of the park by Colborne Lodge. These vertical barriers force the air to ride up along the ridge and without much flapping, raptors are able to ride the updrafts like surfers ride waves.

Another labour-saving tactic is to ride thermals. Where land surfaces heat up in the sun, air rises over these warmer spots and offers raptors another free ride. They cover distance by soaring from one thermal to the next. There are no rising thermals over water and it is too risky for these birds to fly where they will have to expend energy by flapping their wings. If they run out of energy over water, they will drown. That is why many of the raptors fly south until they encounter Lake Ontario where they do a collective “whoa” right over High Park before turning right to follow the shoreline in a westerly direction.

At Home in High Park

High Park has become a permanent residence for a few hawks. A family of Red-tailed Hawks and a Cooper’s Hawk are now year-round regulars that have been fondly named by devoted Hawk Hillers. The birds behave like real characters providing great entertainment on Hawk Hill with their circling, calling, soaring, dive-bombing and performances of aerial acrobatics. Perhaps we may see growing numbers of raptors over-wintering or nesting in High Park with the increase in urban food sources such as rats and squirrels at birdfeeders.

To download "A Guide for Hawks Seen in North America" identification chart as a PDF for single-copy printout for personal, non-commercial use, click here. (Source: Hawk Migration Association of North America website.)

Since the High Park Nature website was first launched in 2010, it has provided a wealth of information about the natural features of High Park. Now we are pleased to present our new WordPress site – designed to perform well…
END_OF_DOCUMENT_TOKEN_TO_BE_REPLACED

“We love High Park for its natural beauty. Will that love be the death of it?” Read the article or The Star Pressreader version
END_OF_DOCUMENT_TOKEN_TO_BE_REPLACED

The most recent High Park Christmas Bird Count was held on Sunday, Dec. 15, 2019 (a very windy day). The High Park route ended up with 43 species, our lowest since 2007. Dark-eyed Junco and Rock Pigeon numbers were the lowest…
END_OF_DOCUMENT_TOKEN_TO_BE_REPLACED

There were over 280 participants (between 110 individuals coming at least once) who came out to High Park Stewards field restoration events. The average number of Stewards that attended each event was 22. Together Stewards contributed to over 575 field…
END_OF_DOCUMENT_TOKEN_TO_BE_REPLACED
TwitterFacebookEmailReddit
Skip back to main navigation